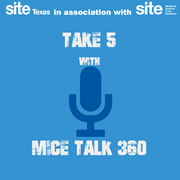 Join SITE Texas as we discuss the people and issues that influence the incentive travel industry.

Listen to all the podcasts

Join the conversation and don’t miss a Podcast with our host, Wayne Wallgren, CIS, CITP.

Join us for another episode of Take 5 with MICE Talk 360 as my guest, Brandi Ronk, Regional Sales Manager for Meila Hotels, shares her hope, and a personal observation, of two good things to come out of the pandemic.

A little of both can go a long way!

Three viewpoints, all reaching the same conclusion – do it!

Join us for another episode of Take 5 with MICE Talk 360 as your guest, Jim Spellos, sheds some light on the naming of his recent CD release – Stroke of Genius. And the brain’s connection with math, art & music.

Like the man says, it was a “Stroke of Genius”.

Join the conversation with MICE Talk 360 guest: Mike Farmer, VP, Group Travel Sales, Strategic Incentive Solutions and 2020 SITE Midwest Board Member. We all have our industry stories, but these three are special.

A different kind of normal.

Join us for another episode of Take 5 with MICE Talk 360 as Rhonda Brewer shares her thoughts on the benefits of engagement and it’s influence on personal and professional growth during uncertain times.

Be Engaged. Be Bold.

Join us for another episode of Take 5 with MICE Talk 360 as Cathy Jones, CEO of Shamrock Innovations, and 2020 chapter President for SITE Southeast shares their efforts to help those impacted by human trafficking.

The more you know, the more you’re able to help put a stop to it. The Justice U Course referenced is here.

Join the conversation with MICE Talk 360 guest: Cathy Jones, CEO of Shamrock Innovations, and 2020 chapter President for SITE Southeast as she shares her multi-chapter history, lifelong friendships and leading with ideas.

Join us for our first episode of Take 5 with MICE Talk 360 with Jacque Goldy, CIS, CITP and Vice President, Incentive Sales and Strategic Partnerships for MGM RESORTS INTERNATIONAL as she shares “Only in Las Vegas” Covid 19 facts and figures.

Join the conversation with MICE Talk 360 guest: Jacque Goldy, CIS , CITP and Vice President, Incentive Sales and Strategic Partnerships for MGM RESORTS INTERNATIONAL shares how she was introduced to the industry she loves, the impact of Covid 19 on Las Vegas, and how, in a round-a-bout way, SITE helped her find the love of her life.

It’s not just another day at the office.

Join the conversation with MICE Talk 360 guests: Erica Seo, Head of Sales Asia Pacific for Pacific World; Huw Tuckett, CEO of Euromic; and Jennifer Patino, CEO of Hosts Global, as they discuss the DMC sector in light of the COVID 19 crisis and the results of the 2019 Incentive Travel Industry Index.

To download your personal copy of the Incentive Travel Industry Index, visit www.SITEGlobal.com.

Listen to all the previous podcasts